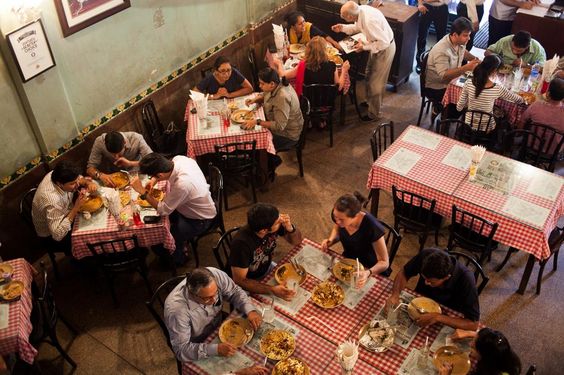 If you want to visit an Indian city with a diverse menu that reflects a melting pot of different ethnicities and cultures, you can’t go far wrong with Mumbai. This crowded city often acts as the gateway for those beginning their travels in India and, as first impressions go, the world’s fourth most populous city is renowned for giving people a dizzyingly hectic introduction to India.

However, instead of allowing yourself to become too overwhelmed, take your visit in your stride and give yourself plenty of time to adjust. Behind the hustle and bustle, you will soon discover the rich history and culture that form the foundations of the city and the legacy the different peoples that now call Mumbai home have left upon the region.

One such legacy is the Parsi cafe culture that has formed a firm part of Mumbai’s social and culinary landscape since the 19th century. The Parsi people, originally hailing from Iran, moved to Indian shores and blended their cuisine and culture with that of their new home during their years of settlement. The people began to open grandiose cafes in Mumbai – most starting as simple tea stalls, run as a family business, which then grew in popularity, size and number. In their hey-day, there were more than 500 Parsi cafes that could be found in Mumbai, but sadly, over the years, this interesting part of the city’s culture has dwindled. Today there are just a handful of these fine establishments left in existence. Could this be the end of the Parsi cafe?

The demise of the Parsi cafe could be attributed to the fact that the younger generation’s attitude to following in the footsteps of the family business in Mumbai are changing drastically. There are more opportunities for younger people to move into more lucrative careers or even take work overseas and see more of the world. Without a new generation to keep the business alive, the Parsi cafe cannot be kept afloat.

One of the last of the Parsi cafes, and one which has gained a reputation as one of the best to visit when you’re in the city, is the Britannia and Co. Restaurants. The faded glamour of its peeling interior might betray the fact the cafe is on its last legs, yet it also adds a certain quirky and authentic charm to the place. Lunchtimes attract a varied group of customers throughout the week – the beauty of the Parsi cafe is that all are welcome, regardless of race, gender, class or religion.

But what sort of food can you expect from the local Parsi cafe? Parsi recipes are characterised by bold flavours and a creative use of ingredients. Many dishes feature chicken, mutton, fish and eggs whilst mild spicing and a reliance on dried fruits is also considered key – think pulao dishes flavoured with barberries and cashews.

Veeraswamy, one of London’s best Indian fine dining restaurants, is the oldest Indian restaurant in London. If you want to experience a traditional and authentic Indian meal like no other, one which draws inspiration from many classic cuisines that can be found around the sub-continent, book your table today.