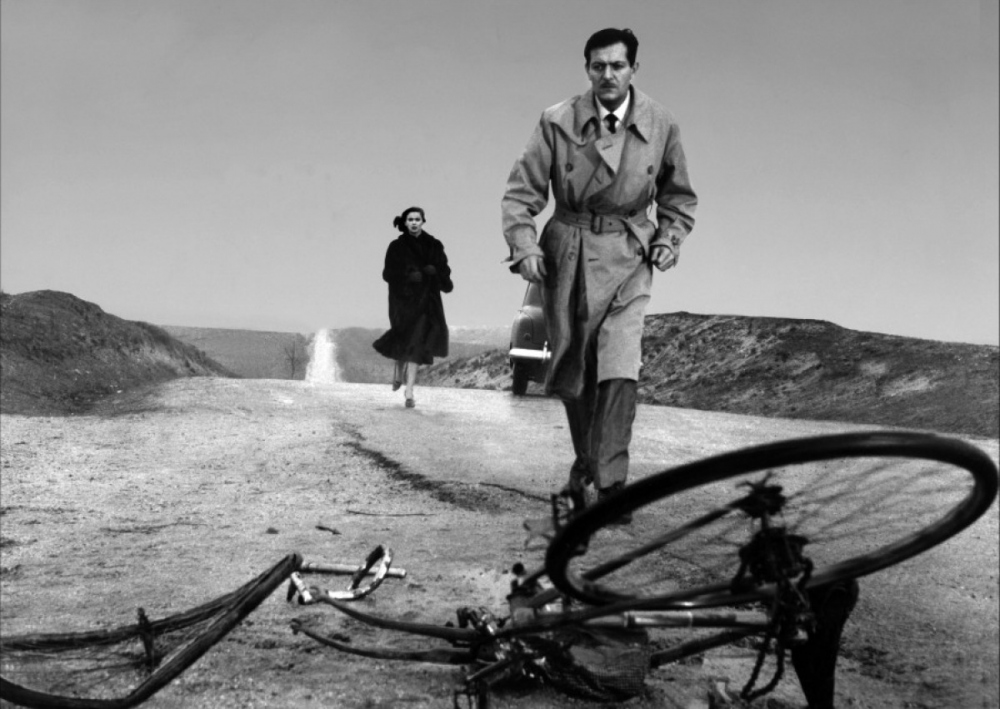 Death of a Cyclist Movie Review

September 8, 2018Comments Off on Death of a Cyclist Movie Review0420
0Shares

Muerte de un Ciclista, released in the United States as both Death of a Cyclist and Age of Infidelity, is a 1955 Juan Antonio Bardem film noir. Considered a classic of Spanish cinema, it was apparently intended in part as an allegory of or commentary on Spain under the fascist dictatorship of Francisco Franco.

An adulterous couple (Alberto Closas and Lucia Bose) inadvertently run over a bicyclist, and flee in panic, leaving him to die. They are paranoid that someone may have seen them, and so in the ensuing days they are alert to any clues that they might be under suspicion, and they investigate any such possibility to see if they have anything to worry about.

They are both of the upper classes. The man self-identifies as the black sheep of his family, but not in the sense that he has a criminal history or he’s been all that bad a person. He’s just become lazy and cynical after evidently being traumatized by the war, and hasn’t done much with his life. He’s been given a faculty position through family influence, which he handles indifferently at best.

The woman has married into money and clearly values living the high life and going to society functions and such.

The first twenty minutes or so are especially confusing as one is trying to figure out who’s who and what their relations are to each other. Or maybe just confusing to me, because it’s black and white, subtitled, about a foreign culture, and about a social class within that foreign culture that’s largely unfamiliar to me. So I was not well positioned to pick up on the nuances of this movie.

As it became a little clearer what’s going on, and who the primary characters are, I could follow it better and enjoy it more, but I can’t say this movie ever grabbed me in a big way.

The style and pace is slow and dull for much of the movie, and overly melodramatic in much of the rest. The dramatic music and close-ups of people looking sinister borders on satire, though maybe it was less out of place in 1955. The ending is made as obvious as can be well in advance (though the little twist that ends the ending I didn’t anticipate and thought was a nice touch).

Despite not being more than mildly into the movie as a whole, I was interested to some extent in the moral ramifications of the story. The two main characters are dealing with the guilt of the incident, with how to feel about each other’s handling of it, with how far they’re willing to go to silence anyone who might be able to expose them, with how their preoccupation with the incident is adversely affecting other aspects of their life and how they treat other people, and with the fact that their involvement with each other is illicit even independent of the manslaughter. And it’s somewhat interesting seeing how that plays out, seeing if either of them will feel guilty enough to confess, or if their panicky efforts to avoid suspicion will be what ironically causes them to get caught.

I found it intriguing, for instance, that once one of them starts drifting toward feeling obligated to confess, they don’t put much if any weight on how that will impact the other. I think that would be a significant factor for me, though. I’d be sensitive to the question of even if I become convinced I should take responsibility for this and accept punishment, is it really my place to decide that for both of us?

It’s all well and good to be morally pure in ways that will bring suffering on yourself, but here another person is likely to be caught in the crossfire. If up until this point, I myself wanted to escape punishment, and it’s only because I had a genuine change of heart and was able to see things in a new perspective that led me now to feel obligated to confess, am I justified in making that moral choice for another person who hasn’t come to that realization, and is still where I was before?

Maybe that’s just the breaks. Maybe it would still be obligatory to turn oneself in. But I’d like to have seen the person struggle a little more with the impact it’ll have on their partner that they allegedly love. Maybe try to figure out some way to take all the blame so their partner can make their own decision rather than be carried along unwillingly by the first person’s. Or at least feel bad about dragging somebody else down, even if it’s the best of the available options.

So aside from whether there’s an obligation to sacrifice oneself in a situation like this, I think there’s a separate, additional problem with squealing. This is a case where confessing will probably unavoidably include squealing as a byproduct. I can understand why the movie presents it as a noble choice, but there’s some selfishness to it as well.

But now to the most important point: I love the character “Rafa” (Carlos Casaravilla), an art critic who’s allowed to hobnob with high society while not really being accepted as a member of it. He has a cynical, bemused, sometimes bitter take on it all which is entertaining, but mostly it’s his bizarre looks that are fascinating. He must be the Spanish Peter Lorre or something. He’s really odd and distinctive looking like that, delightfully creepy.

He insinuates to the couple that he knows things that he may or may not choose to blackmail them over. They are desperate to figure out if he knows they’re having an affair, knows about the accident, knows both, or is bluffing and knows nothing. But he’s having a wonderful time being mysterious and torturing them by stringing things out as long as possible.

I wanted more of him. When he was less involved is when my attention tended to flag.