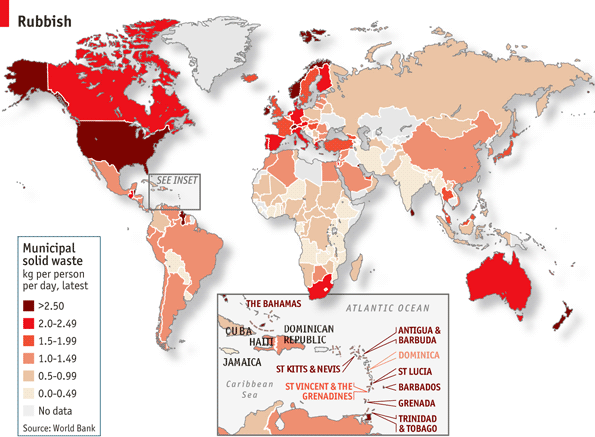 A Global Comparison of the World’s Garbage

May 7, 2015Comments Off on A Global Comparison of the World’s Garbage0239
0Shares

Pictures of slums and garbage piles in underdeveloped areas have always evoked deep feelings of sadness and bitter remorse. There is nothing more depressing than seeing mountains of debris scattered across a domestic area. It is even much worse when you see people picking up litter in order to sell it or reuse it in their own purpose.

Picture something from a Mad Max movie perhaps but without the road racing gangs. These sites are something that can be seen every day in underdeveloped countries or areas or perhaps in places where the urbanization is quite high. Actually the highest rubbish output is seen in areas which achieve a high and fast development of their cities.

The most urban areas are actually the most polluted ones. It actually makes sense as there are more people there to produce more waste. The high standard of living comes with a cost as people shed materials while producing and in order to have better lives we need to throw out the unnecessary things in the name of progress.  However it would be wrong to think that only urban areas are polluted – just take a look at these facts presented on London Waste Clearance blog.

This is the affliction which areas that get hit with the high grossing and rapid urbanization suffer from. Sure the area gets a modern feel to it but many people get to disregard the grim fact behind it and hide the piles of rubbish behind happy homes and well developed areas.

The majority of the garbage of the world is produced by city dwellers and the World Bank wars us that the cost of dealing with this ever growing waste piles will only be increasing, based on the reports that the municipal solid waste produces (MSW). The numbers show that currently cites produce 1.3 billion tons of MSW are year, which is actually 1.2 kg per person. Interestingly, half of this waste output comes from OECD countries. The studies show that the rise in the output is going to be substantial during the next 10 years.

The prediction says that by the year 2025 the output of waste will rise to 2.2 billion tons, while an average person will be producing 1.4 kg of garbage a year. The highest pollution producing countries today are China and the US, and estimation shows that by 2025 China will be making 1.4 billion tons, opposed to the current 520 million, while the US will increase from 620 million to 700 million tons per year.

Despite this global increase, the situation in the UK is a bit better than before. This is not to say that everything it coming up roses in Britain but perhaps the people are becoming more environmentally aware. According to the survey from 2008, 290 million tons of MSW were produced in Britain. According to the Waste Atlas Platform, the MSW was almost 30 million tons for 2012, showing a decline and great awareness of the people. This is perhaps owed to the Department for Environment, Food and Rural Affairs (DEFRA), which indicate a National Waste Strategy which an aim to foster sustainability in waste management within Great Britain.

In England, for instance, the greatest problem was dealing with the food waste issue. This problem actually started long back in 1915, and has afflicted England for years to come. Finally the launch of a program called “Love Food, Hate Waste” in 2007 was the beginning to solve this problem and today we also have the “Waste & Resources Action Programme” (WRAP) which is taking affect and dealing with this issue. Also a number of waste-to-energy power plants were established, particularly in England, which provide great help in solving the problems made by the waste. There are a number of them scattered all across the country and they are doing great work in alleviating the waste and the rubbish of the country.

Scotland on the other hand is perhaps dealing with many problems regarding this fact. They are struggling to keep up their part clear and will need to introduce some new solutions on their part. The numbers speak for themselves For instance, back in 1993 Scotland produced 14 million tons of waste, out of which 100.000 tins were toxic while the 260.000 tons were controlled.

Almost 90% of the controlled waste was buried in landfills and produced 2 million tons of methane gas that way. 1.5 % was burned while 1.5 % was exported to be disposed or recycled.  Currently there are 900 disposal sites in Scotland which are dealing with this issue, but the number will need to rise if some good results are expected to come out of this.

The numbers are not good at all for us the human beings, and they also state that even Britain is not impervious about this. The problem needs to be addressed on the global scale and people’s mindsets need to be changed in order to think rationally and find a common solution of this as if we want to survive and keep our planet healthy we will need to take much better care of it in the future.