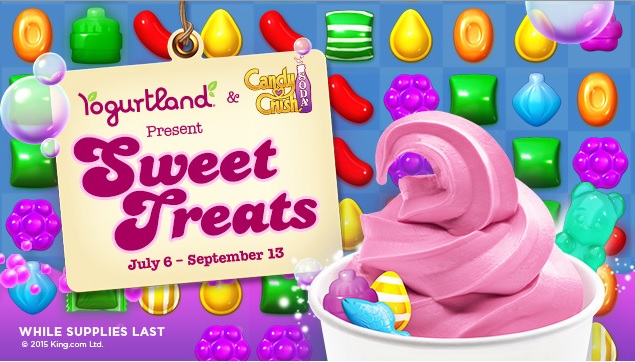 Yogurtland is all set to promote their brand using the Candy Crush fever all over the world. Now Yogurtland fans will soon get the chance to wax their Candy Crush Saga gaming passion into their real life and take it to another level. Candy Crush gained its popularity on Facebook like wildfire and outstretched the fever all around the world. At the moment, the game is available in every format, i.e. Android, Windows and iOS. Moreover, fans can also play Candy Crush for PC. Anyway, Yogurtland is running a “Sweet Treats” campaign From July 6th to Sept. 13th where the company is offering handcrafted flavours, which is inspired by the famous characters and episodes of Candy Crush world.

Yogurtland fans will also be experiencing the flavourful fun level of Candy Crush Saga  in the campaign. According to Kathy Huynh, the marketing manager at Yogurtland, Candy Crush and Yogurtland is a super match and the employees are super excited to bring its Candy Crush flavours to the guest. During the “Sweet Treats” campaign of Yogurtland, the company will introduce one-of-a-kind Candy Crush-inspired flavour every week, which will also come with renowned Candy Crush character spoon.

In the event, the guests will also get the chance to win 10 grand prizes, ‘unlimited cup’ prizes or free yogurt for a year. The last flavour inspired by Candy Crush will arrive on Aug. 31, 2015.

Maple Donut: Fans really love the combined flavour of maple donut and cream, this flavour has been the best selling product of Yogurtland in the campaign.

Blue Raspberry Sorbet: whirling Real raspberries made this classy flavour. However, the flavour is only found in the Lollipop Meadow until now.

Candy Clouds: This is a perfect mix of sweet airy goodness and sweet, which makes it a delicious cotton candy flavour.

Yogurtland has over 100 unique customized and different flavours, which separate the company from competitors. The company uses real ingredients whether it is traditional flavour or a outlandish one. By controlling the frozen yogurt market, Yogurtland has taken its flavours, taste and quality to another level and get hands on over millions of fans in Dubai, Guam, Thailand, Venezuela, Australia and U.S.

Well, any brand turning into a mobile game is not new but mobile game going as a food brand is new. Yogurtland will also be introducing some other flavours like Cupcake Carnival, Lemonade Lake, Minty Meadow, Salted Caramel Gelato etc. Guests can also find the flavours inspired by the new installment of the game, Candy Crush Soda Saga.

What To Look For When Renting Commercial Property Next post