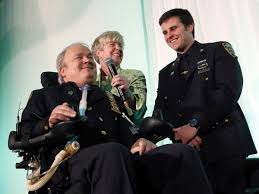 October 5, 2017Comments Off on Wounded Officer Gets Assistance from Malverne Company0289
0Shares

On a Friday in late June of 2016, a call came through to a part-time police officer in Folcroft named Christopher Dorman about drug activity in the 1500 block of Elmwood Avenue. Dorman didn’t hesitate and went to the scene. However, minutes later, the young officer, who was only 25, was shot several times at point-blank range and was struck in the cheek, arm, groin, and neck.

Officer Dorman was wearing a bulletproof vest that stopped three additional bullets that would have penetrated his chest and back. Doctors stated that the vest probably saved his life, according to reports in the Delaware County Times.

A month later, Dorman was struggling to move on from the incident and get his life back in order.

One of the things he got to look forward to was a big improvement to his 2012 Jeep Wrangler. The vehicle got a multitude of upgrades and was awarded to Dorman as a surprise at the Southern Delaware Jeep’s Summer Beach Bash in Bowers Beach. Dorman and his father, George Dorman, are both members of the club.

George Dorman said that the Jeep is his son’s baby. The pair was at the offices of Turn 5, an e-commerce company that provides upgrades on Ford Mustangs, Jeep Wranglers and F-150s that are aftermarket vehicles.

Turn 5 decided on making a donation to Dorman, an easy decision. The vehicle was in the process of being upgraded by the Jeep Club prior to the shooting.

Andrew Voudouris co-founded the company with brother Steven and the two decided to make the updates and surprise the young police officer. He explained that everyone wanted to pitch in and help so that they could thank Dorman for his service to the community.

Turn 5 & Steven Voudouris made sure to fully customize the Jeep for Dorman. There were a few nice enhancements made, including brand new front and rear bumpers, larger tires, a lift kit and LED light bars and headlights. There is even a custom vinyl decal of the officer’s badge number, which gives the Wrangler a special touch to make it uniquely his. Overall, the work took around two weeks to be finished.

Dorman was slated to return to work in mere weeks after the shooting. However, his father stated that he would need further surgery to his nose and face.

George Dorman proudly said that his son lives his life with gusto and that he is happy to be alive. He fondly continued that Christopher has always been there to help others and made it his life’s mission.

Christopher Dorman said that he wanted to thank everyone involved in the surprise. He added that he never imagined that it would be to such an extent and that he only expected a little work on the Jeep. He was delighted with the work and said that the vehicle runs even better than before.

Turn 5 Inc. was founded in 2005. The company has rapidly grown over the years in both space and in the number of employees who work for it. As of 2015, there were already 350 employees working at Turn 5, but Steven Voudouris said they were looking to hire 50 more people.

Steven concluded that they wanted to stay in the area because of all the talented people they have met over the years.

How To Shortlist The Best Engineering Colleges In India? Next post