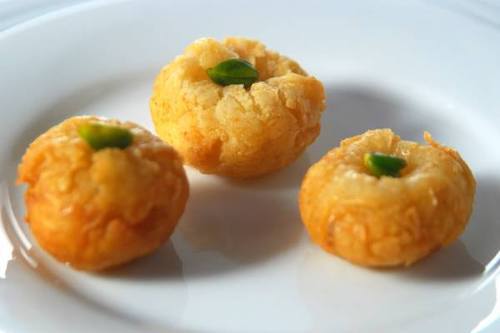 The Sweets Of Bihari Cuisine

Bihari cuisine offers a vast and varied menu of delights, bringing together the traditions of North and East Indian cooking into a delicious melting pot of recipes, culinary techniques and flavoursome ingredients.

Despite traditional Bihar society favouring the vegetarian lifestyle of the Buddhist and Hindu belief systems, there are also numerous meat-based specialities enjoyed throughout this region of India, with mutton and chicken being particular favourites of the people. The rivers that flow through Bihar also mean that there is plenty of fish on offer throughout the year too and the people utilise dairy produce to great extent in their daily diet.

However, it is the delectable range of desserts where the cuisine of Bihar truly excels itself. The sweets of Bihar are an integral part of the culinary culture and the list of treats would not look out of pace on the mouth-watering menus of some of London’s best Indian fine dining restaurants. The neighbouring cuisines of Bengal and Odisha also boast a similar range of delicious delicacies but where the desserts of these regions rely on sugar soaked syrups, Bihar favours drier desserts.

Here are some of our favourites:

Similar to the flaky Middle Eastern sweets known as baklava, khaja is created from wheat flour and sugar cooked into layers of crispy dough. Often dried fruits and nuts are used to stuff or decorate these delicate pastries.

These circular sweets are made from pounded sesame seeds mixed with a heavenly mixture of jaggery and can come in a white, light brown or dark brown colour, depending on the type of sugar used. In the winter months, when the sugar cane harvest is collected, tilkut becomes widely available in Bihar.

Malpuas are particularly popular in Bihar and West Bengal. They are a type of Indian pancake that can be eaten savoury with various curries and stews or sweet. Malpuas are prepared with ripe, mashed bananas and flour whilst additional flavour comes from crushed cardamom and sugar. They are eaten extensively at festivals such as Holi and are a popular offering made to the gods.

These deep-fried treats are enjoyed in Nepal and Jharkhand as well as Bihar and the recipes vary according to taste. Cardamom, flour, melted sugar and ghee are used to create a dough which is brushed with ghee and fried to reddish brown colour. In Bihar the people prefer their thekua to have a little more firmness and crunch compared to the softer versions prevalent in other states.

Said to be a favourite of Ganesha, the elephant headed god who is often depicted with a bowl of these round balls of flour, sugar and coconut, laddoos have many different variations and are consumed all over India as well as Bihar. Often, Ayurvedic ingredients are added to the mixture to add health benefits to this otherwise sinful, high calorie snack.

Reminiscent of a Krispy Kreme donut, balushahi are made with maida flour, deep-fried in ghee and soaked in a sugar syrup. They are believed to have originated in the kitchens of the mighty Mughals, the maharajas who enjoyed their decadent sweets and experimented to great effect developing all manner of flavour some treats worthy of kings.

For more information on this log on to: http://www.fineindianrestaurants.com/

Why Keloggers Are An Important Tool For Your Office? Previous post