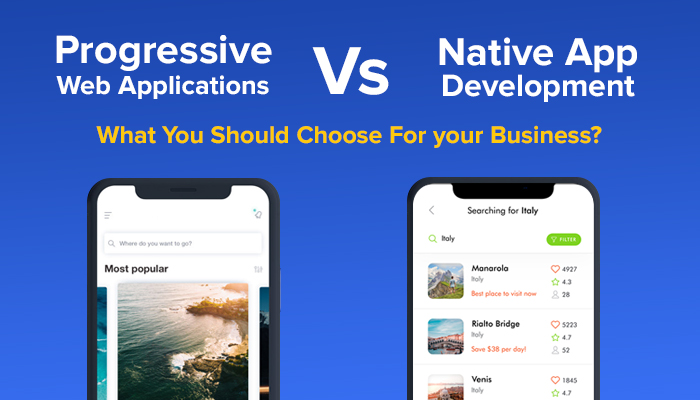 Progressive Web Applications Vs Native App Development – What You Should Choose For your Business?

When it comes to the user experience, are PWAs that bad? A dedicated native app has incredible benefits however it’s a costly gamble if users don’t install it. That said, can PWAs be your first choice? Can it replace the mobile web or native apps in the future? This article will help you explore all your questions like,

A Progressive Web App, What’s That?
Unlike traditional applications, PWAs are a smart combination of regular web pages and a mobile application. PWA reduces the steps between the discovery of an app by directly getting on the home screen and thereby eliminates the friction of several app installations.
What are the benefits of deploying your app as PWA?

Challenges in opting for Progressive Web App
While considering for PWA development, you need to know its limitations before making the final investment.

Native apps have a lot of competition thus, it is difficult to get recognized in a congested space. You might think that your app has a unique edge over others. However, even if you target region-specific mobile users then again you need to consider the mobile app types perform well in the marketplace. According to a recent Statista, roughly 70 to 80% of mobile apps go into four categories Entertainment, social media, instant messaging, or games. If your app isn’t one of them then it would be risky and expensive to go for native app development. A reliable Mobile App Development Company offering PWA solutions help you choosing the best framework, technology, and features which helps you in competing with other apps in the app stores and get achievable results in short time.

The progressive web app comes with an additional benefit that is ranking in Google search engines. As PWA live in mobile browsers as well as a button on the home screen, it is much easier to get a maximum number of installs. You can drastically reduce the friction often caused by already existing apps in the app store.

PWAs don’t come with pay-to-play that means all the revenue generated goes directly to the owner’s pocket. It is not the only way you are making from PWAs; they are significantly easier to build than native apps. Also, the cost to maintain, update and add new features is always less than native app development.

Dive deep into the Development Cost of building PWA

The average cost to build a progressive web app is between $3000 to $20,000. Although, there is no simple answer to this inquiry as there are multiple factors at play. Factors like which frameworks, development rates, project complexity, technologies, features required have a huge impact on deciding the cost of the mobile application. Well, it also depends if you outsource Web app development. Selecting the right technology partner is a tedious task however, the right consulting vendor can bring tremendous benefits for your business.
To find out an estimated cost of your mobile app development idea, you can use an app cost calculator which gives a fair idea of budget needed within minutes. All you need to select the right features for your app and here you go.

When choosing between a native app or PWA, you need to figure out the purpose of developing the app which allows you to decide its functionalities. If all the features are covered, then there is no sense in spending more on native apps.
PWA is the future of the mobile web. There is a possibility that it becomes more popular than native apps by offering the best of two worlds – native app and website. Bigger opportunities are waiting for both users and developers as the technology continues to develop.