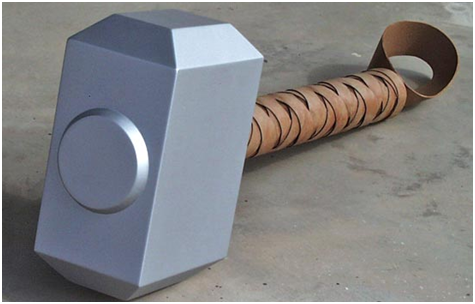 How Strong Is Thor’s Hammer?

From the reading material preferred by the guys in The Big Bang Theory to The Simpsons’ more jaded Comic Book Guy coupled with the fever-pitched anticipation of the new Avengers movie, it is clear that comic books have never been more fashionable. Whilst for many, these movies and comic books represent a fantastical world, where disbelief can be suspended in favour of a less realistic world there are many different people who look to the science and gadgetry used within comic books and attempt to use it to inspire real world items.

The Strength of Mjolnir

Thor’s hammer was said to have been forged in a dying star, and weighs an impressive 42.3 lbs. Whilst that certainly isn’t enough to make the hammer impossible to lift, the biceps shudder at the thought of wielding it. Any serious fan of Marvel’s universe will tell you that it is not the weight of Mjolnir which precludes mere mortals from wielding the hammer, but the fact that only one deemed worthy can use its power. The awesome power that comes from such a hammer is obviously added to by the superhuman strength of Thor, and given that the new female iteration of the iconic character is even more popular than the traditional male version, outselling it considerably, the gender of Thor makes no difference to Mjolnir.

Some calculations which sought to work out how heavy the hammer would be if it were forged from a dying star rather than in the heat of it, and based on the dimensions of the hammer wielded by Chris Hemsworth in the two Thor movies, put the imagined weight of the hammer at 10 quadrillion pounds (or about 97 million times the weight of the Titanic).

Of course when using a traditional hammer, worthiness is not usually a problem that is often considered. The strength of the hammer and quality of the handle are hugely important, which is why Indestructible Handle hammers from manufacturers such as Redashe ltd are so popular.

Iron Man’s alter ego Tony Stark created his iconic suit when he was captured by soldiers, which makes it apt that the US military are looking at utilising some gadgetry inspired by the comic book hero to help its soldiers out in the field. Included in the plans are exoskeletons which can help soldiers to carry far larger loads than previously possible, whilst also helping them cover greater distances on foot. Soldiers would also be issued with materials which work in a similar manner to Google Glass, as well as smart fabrics which monitor a range of vital signs.

Unlike in Iron Man, the suits will not be designed by one person or by industry, but it is likely that the best minds in the country from schools such as the Massachusetts Institute for Technology will be utilised in order to get the best possible designs without commercial considerations getting in the way.

How Is The World Wide Web Different From The Internet? Next post