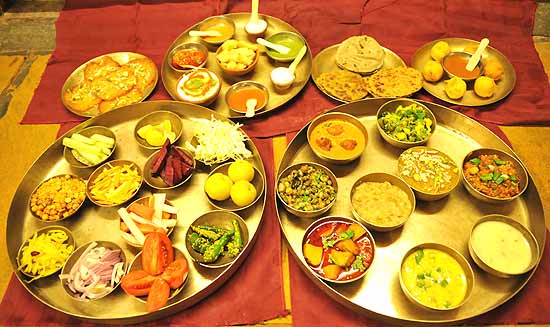 The 4 Pillars Of West Indian Cuisine

The Western states of India are a mix of cultures, landscapes and ethnicities as diverse as the delectable cuisine the region is famous for. However, there are arguably four states in particular which really showcase the unique flavours and culinary heritage which brought the dishes of western India to the attention of the world.

The iconic cuisine of Gujarat is predominantly vegetarian, mostly due to the influence of Hinduism and Jainism – the two most prevalent religions of this traditional state. Thali spreads filled with colourful vegetables cooked in an assortment of spices, often with a sweet and salty edge, are bountiful in Gujarati culture. Curries consisting of okra, potato, peas, bottle gourd and green beans can be expected to form the bulk of a thali platter, whilst a dal dish, rice, dumplings and warm rotis can also be expected to make an appearance.

The vegetable dishes of choice change with the seasons due to the availability of crops. In Gujarat you can expect summers of ripe, juicy mangoes and milk-based gravies – kadhi, a sweet curry made from buttermilk, is a particular favourite. The winter may see a shift towards root vegetables, whilst fried foods and heavily flavoured spices, such as garam masala, are particularly favoured.

Flatbread and rice are equally important to the people of Maharashtra, dependent on region. A typical meal will include one or both as an accompaniment to a vegetable bhaaji, commonly cooked with a masala known as goda masala. This is a popular blend of onion, garlic, red chilli powder, green chillies and mustard.

Just as in Gujarati cuisine, lentils and daal are important to the daily diet of this state and seasonal vegetables are core to the Maharashtra dinner table, although garlic and onion is avoided by certain groups due to the religious connotations.

Goa has sung its siren song to travellers the world over with its tropical coastline and exotic cuisine. Just as in the other western states, rice plays a pivotal role in the Goan diet but due to the proximity of the coastline and the abundance of coconut palms, seafood and coconuts also feature heavily.

As in Maharashtra, onion and garlic are used minimally. Instead, Goan cooking relies on the chillies of the west as well as seasoning from curry leaves, asafoetida and mustard seeds.

Finally, we have the cuisine of Rajasthan, a popular choice amongst visitors to India. The creative side of western cuisine comes to the fore in this state as the arid desert means there is a lack of fresh vegetables and water. As a result, pulses are integral to Rajasthani cuisine, as well as dried fruit and pickled preserves – vegetarians are still catered for just in a different way to other parts of the west.

Buttermilk and ghee provide moisture and richness to dishes that are lacking in water and classic recipes include mohan maas, which is meat cooked in a gravy enriched with milk.

A visit to one of London’s best Indian fine dining restaurants can take you on a culinary tour of this mighty country – the mouth-watering dishes that feature on the menus are inspired by the very best of authentic Indian cooking.

Lost or Had Your Travel Money Cardstolen?Actions To Take Previous post

Tips For Traveling To Cuba Under The New Laws Next post