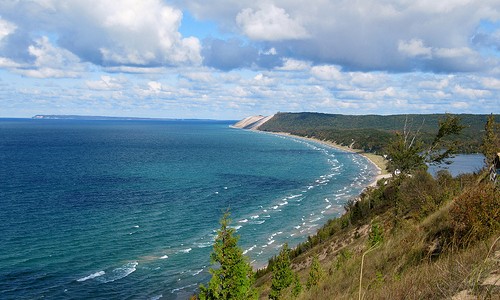 4 Classic Michigan Beach Towns To Add To Your Bucket List

March 19, 2015Comments Off on 4 Classic Michigan Beach Towns To Add To Your Bucket List0221
0Shares

Who doesn’t love a good, little beach town?  There’s just something about them that make you feel like you’re taking a step back in time, both to your own childhood and to a simpler time in the past.

It’s the sandy sidewalks, the smell of water, the general stores that corner the market in sunglasses and floaties, and the charming little ice cream shops that seem to be exactly as they were half a century ago.

The Mitten State is positively chock full of these quaint beach towns, all tucked into the many lakeshores the state has in spades.  If you’ve never explored the natural beauty of Michigan, read on to find out where to start.

Located right in the heart of the much-loved Sleeping Bear Dunes National Park, Empire has a lot to brag about.  When it comes to natural beauty, this place is pretty spectacular – the 400 foot high dunes, and miles and miles of pristine beaches and hiking trails can make you feel like you’re not in Michigan anymore, Toto.  In fact, the stunning blue expanse and light sand of these Lake Michigan shores may even have you feeling like you’ve been transported to a Caribbean island.

For those that love an active holiday, there’s no shortage of activities to get you moving:  dune hikes, kayaking, and scenic bike paths are just a few.  But if your idea of vacation is slightly more leisure-oriented, you can simply kick back on one of the many Lake Michigan beaches or head to the smaller, warmer waters of North Bar Lake, which is perfect for little ones.  And if you tire of the sun and sand, stroll the charming village shops and restaurants.

Within just a couple hours of both Chicago and Detroit, the sister towns of Saugatuck and Douglas have long been popular vacation spots for big city dwellers looking for a respite from the rat race.  Not only is this area home to Oval Beach, named one of the best shorelines in America by Conde Nast Traveler Magazine, but it also has a thriving artistic community.

For more than 100 years, it’s been home to the Ox-Bow Institute, an artist community affiliated with the Art Institute of Chicago.  The area also boasts several art galleries, wineries, upscale restaurants, and even its very own craft beer brewery.  But don’t worry, it’s still got a definite charming small town vibe – to get your dose of old school appeal, grab a stool at the old-fashioned soda fountain inside the original Saugatuck Drug Store that looks pretty much the same as it did 50 years ago.

For a town of just 15,000 people, Traverse City has much more than its fair share of natural beauty and cultural attractions.  Located on picturesque Grand Traverse Bay, the place has become a dream destination for foodies and wine lovers.  As it’s home to 16 microbreweries, over 30 wineries and many gourmet restaurants, it’s no surprise that Traverse City has been named one of Bon Appetit Magazine’s Top 5 Foodie Towns and has drawn the likes of Mario Batali, who owns a home here.

And when you want to work off all that amazing food and wine, there’s plenty of outdoor activities to get the blood pumping.  Of course you can just play on the gorgeous, uncrowded beaches, but you can also scuba dive sunken ships, hike sandy trails, try kiteboarding, or kayak down a lazy river.  Traverse City is a great place to visit when you can’t decide between an urban vacation and a nature escape.

Located in Lake Huron, this entire 3.8-mile island is a National Historic Landmark that’s so committed to history and nostalgia that motor vehicles have been officially banned here since 1898.  Though there are fewer than 500 year-round residents, the place is a magnet for visitors in the warmer months.  Most reach the island by ferry and then get around on foot, bicycle or horse-drawn carriage.

The town has a decidedly Victorian feel and is brimming with cute boutiques and restaurants and, of course, shops that make the famous Mackinac fudge.  After getting a feel for the quaint, historic downtown (and tasting some of that heavenly fudge), see the island from the comfort of a horse-drawn carriage or do a self-guided bike tour on the perimeter road that circles the island.  Once you work up a sweat, take a dip in the cool water off one of the pebble beaches.  But if the water is too cold for your taste, you may want to stop by the huge, beautiful pool at the Grand Hotel.

These are just a few of Michigan’s cute little beach towns worth visiting. If you’re looking for summer vacation ideas, consider these charming small towns that offer big opportunities to enjoy nature and cultural attractions.

About the Author:  Jay Deratany is a longtime Michigan lover whose passion led him to Saugatuck-Douglas, where he filmed an indie film that he wrote and produced.  While shooting, he fell in love with one of the locations, a historic Victorian Mansion, which he bought and turned into The Kirby, a luxury boutique hotel and wine bar that’s a little different from most Saugatuck lodging.  Jay is also an attorney, human rights activist and frequent guest blogger on travel sites.  Visit www.theKirbyHotel.com for more info!